Global Art Festival from Friday 19th November 2021 to Sunday 9th January 2022,
A shiny gold flying object, rhythmic voodoo sounds and a whale made of denim. For the first time, the Global Art Festival will take place this winter at the Germanisches Nationalmuseum in Nuremberg. The third edition of the festival is about the encounter of contemporary artists with historical places and objects. This year’s festival will focus on one question in particular: How can the challenges of (post)migrant realities in complex societies be reflected through art and culture? 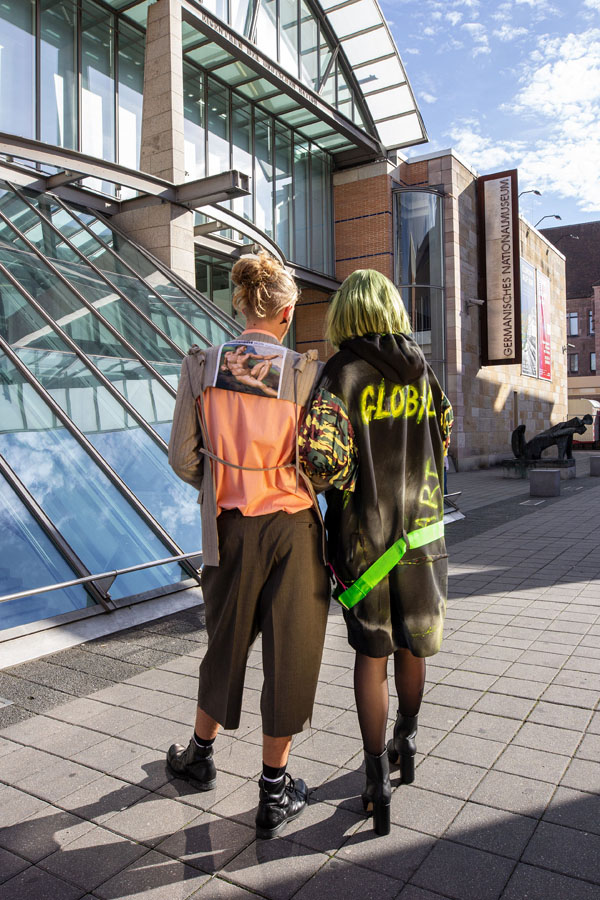 From Friday 19th November 2021–9th January 2022, 56 contemporary artists will present their works in the context of the historical collection for seven weeks. Participating are regional, national and international artists whose works respond to works from the museum’s holdings and Nuremberg as a location which will be temporarily set up in the permanent exhibition rooms. By doing so, the contemporary artistic positions enter into a critical dialogue with the museum’s collections.

A possible route begins in the Carthusian Church, where Viron Erol Vert’s shiny gold installation Abraham 1 can be seen. Abraham 1 is a three-dimensional version of the flying carpet. It is part of his three-part Abrahamic Cycle, in which the artist tells the story of the flying carpet that Solomon/Suleyman received from God. The installation is reminiscent of a satellite, and at the same time of a telescope due to its position looking skyward and the possibility of looking through it. The work fits fantastically into the architecture of the church, whose soaring vault also pushes towards the sky. 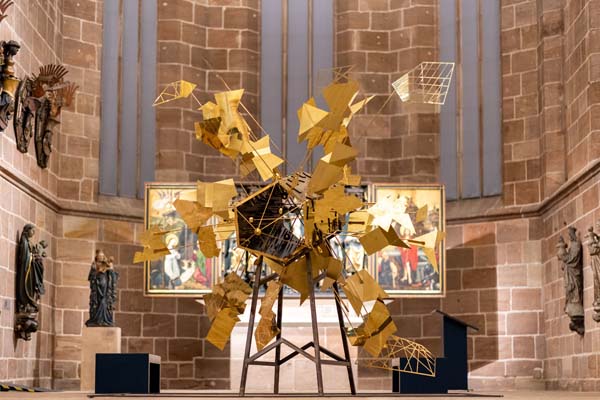 Through the adjacent cloister and in other rooms throughout the museum, 19 toques by Jan St. Werner and Tunde Alibaba resound. The percussionist, who comes from Benin, has recorded rhythms with a dubious hourglass drum. Both skins were recorded separately and are now played by two loudspeaker boxes facing each other in the room. The museum space thus becomes a resonating body. At the same time, Jan St. Werner’s electro-acoustic installation reminds us that music and rhythms are also part of our cultural memory.

On level 2 in the permanent exhibition on Volkskunde (folklore) lies a stranded whale between Hallig and Frisian Hindeloopenstube, which the consumer-critical collective YAR (Christopher Mau and Marga Leuthe) made sustainably from overproduced denim. Old clothes in shades of red, reminiscent of blood, spill out of the whale’s interior. This reflects the fact that Germans buy an average of 12kg of clothing a year, many of which is made of polyester, causing the synthetic fibres to end up in the sea when washed. In contrast to the dead whale, Susanne Dundler’s heartbeat sounds muffled through the department as a sound installation – an unmistakable sign of life. The farmer’s and Hallig parlours installed around 1900 in the Germanisches Nationalmuseum were also intended to appear lively and like living environments staged true to life. It is not allowed to enter here, the museum staging made the life of the parlours leave them. 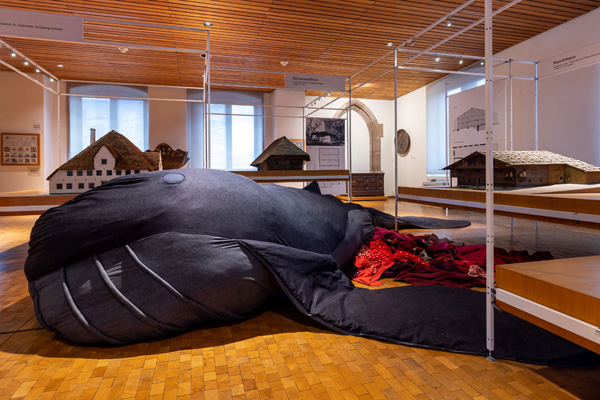 Especially noteworthy are also the works of art by Miro Kaygalak and Henrike Naumann because both artists deal critically with recent German history and right-wing extremism in Germany. The work by Miro Kaygalak is provocative: he has engraved “Dem deutschen Volke” (To the German People) on a baseball bat, which is associated as a weapon of right-wing violence. The typography and wording are identical to the inscription above the German Bundestag. From whom does power emanate? By what means is it enforced? And what does “nation” mean anyway – can a people be “created”? 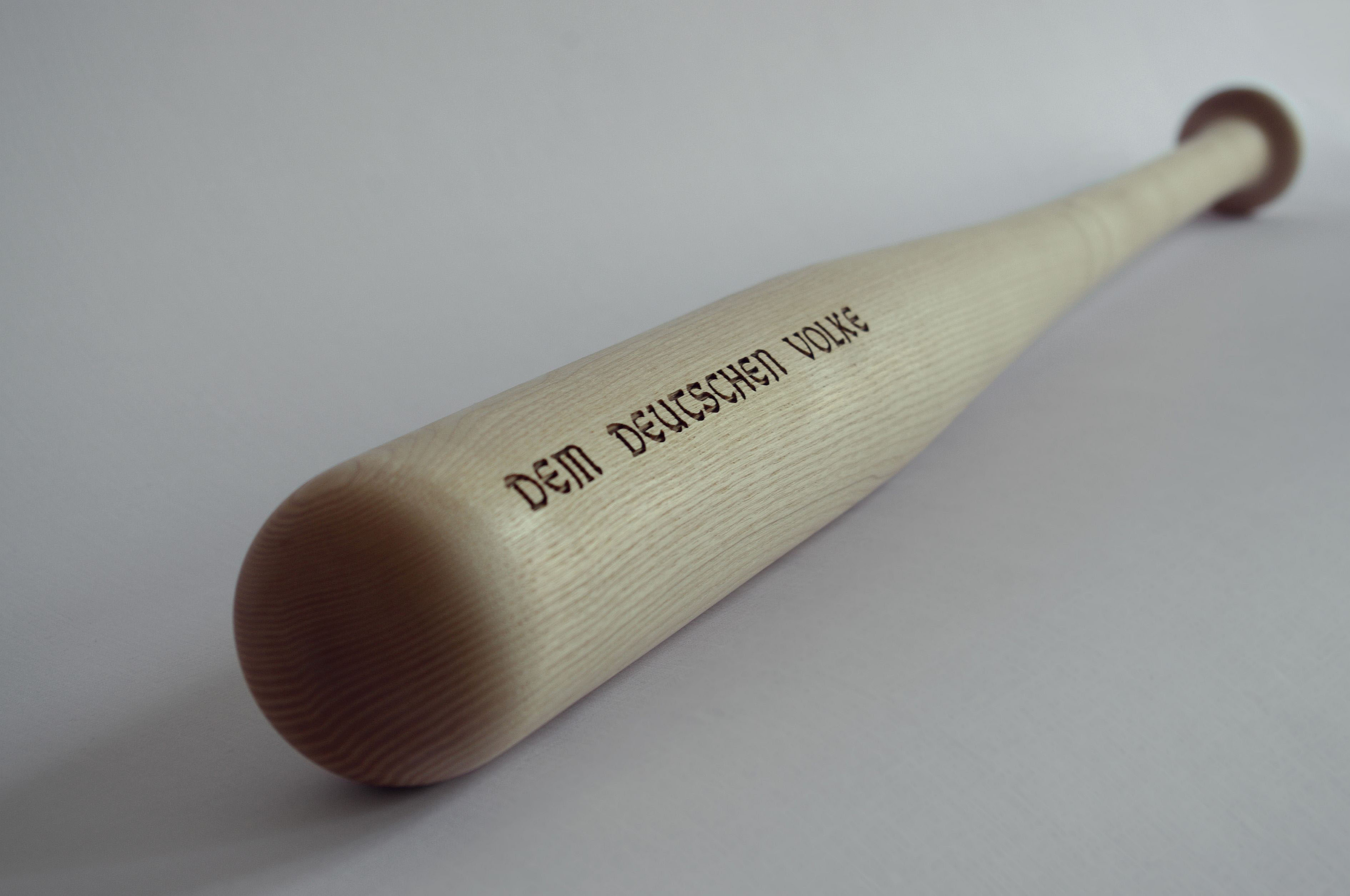 Whereas Henrike Naumann, with her furniture and object installation, deals with the history of right-wing terrorism in Nuremberg and Bavaria since the 1980s and tells of drastic events in Nuremberg’s recent history: the banning of the Wehrsportgruppe (WSG) Hoffmann, the discovery of an arsenal of weapons in 1980, Helmut Oxner’s rampage in the Nuremberg discotheque “Twenty Five” in 1982 , and the attacks of the National Socialist Underground (NSU) in Nuremberg between 1999 and 2005 to name a few. With this, Naumann continues to bring the history of the Germanisches Nationalmuseum into the 21st century.

Accompanying the festival are numerous workshops, guided tours, and talks to which visitors are invited to participate and think along. Information on all participating artists and their works as well as the accompanying programme can be found at www.globalartfestival.de.

Global Art Ticket
€16, reduced €10* valid for the entire duration of the festival for an unlimited number of museum visits. (*The reduced ticket price applies to children and young people from 7 to 17 years of age, schoolchildren, students, severely disabled persons, unemployed persons, closed groups [10 people or more]).

Please note that the 2G plus rule (vaccinated or recovered plus negative rapid test) and the obligation to wear an FFP2 mask applies in the Germanisches Nationalmuseum. For more information on your planned visit please visit www.gnm.de. Please also note that an admission ticket is required in addition to each participant ticket.

Based on the press release from 16th November 2021 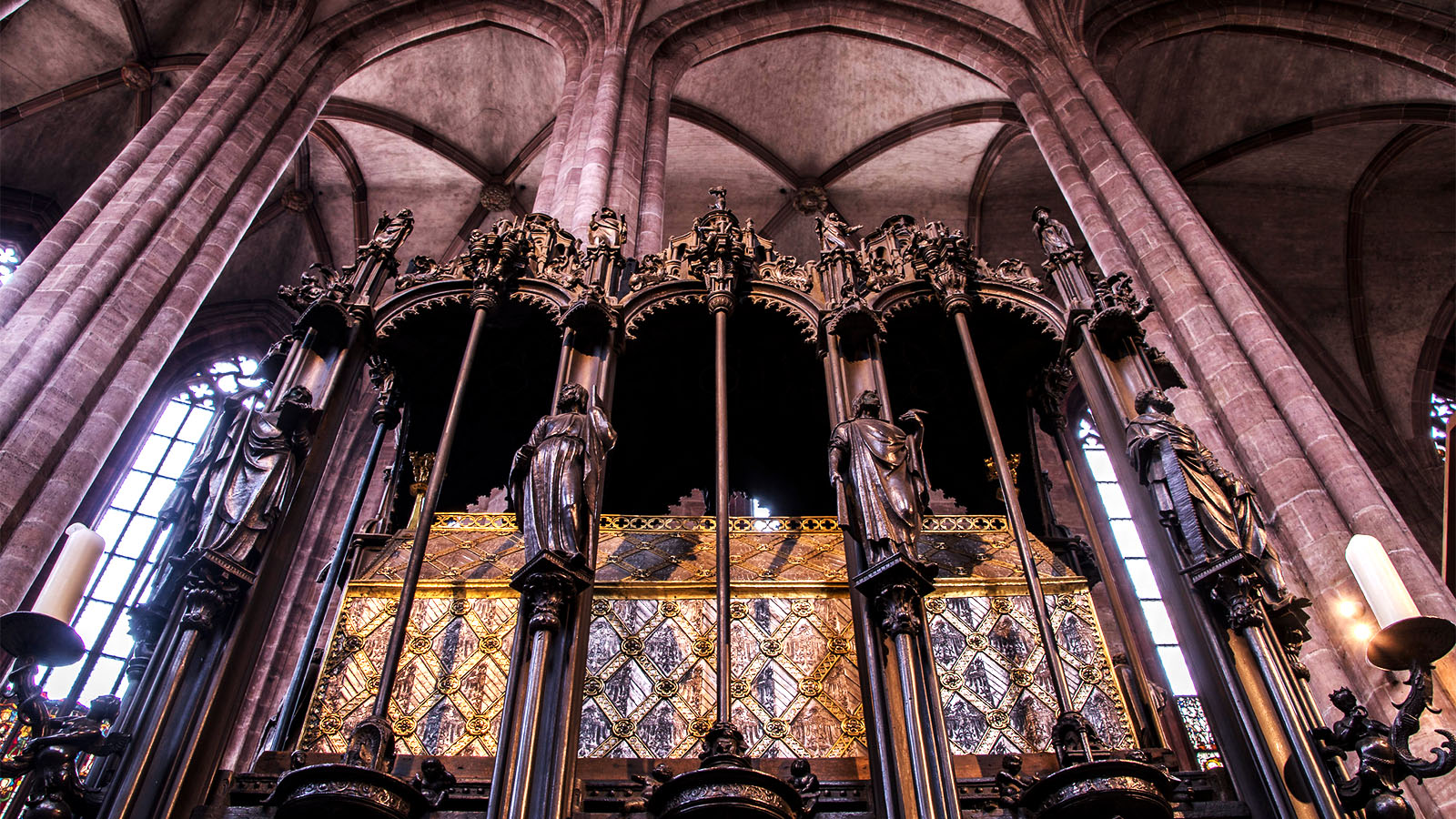