I don’t know what it means to be a real “Roma,” but to me, it means resilience, falling and getting up, desire to live and smile, not to forget and to make the pain a part of you, transform it, pass it on and share it through art.
Ivana Nikolić.

I had the exceptional opportunity to meet an admirable and genuinely optimistic young woman, Ivana Nikolić as part of the awareness week “we talk about it: EXIT RACISM.” This program was initiated and organised by the action alliance “we integrate e.V.” during the International Weeks against Racism in March 2022 in Nuremberg. 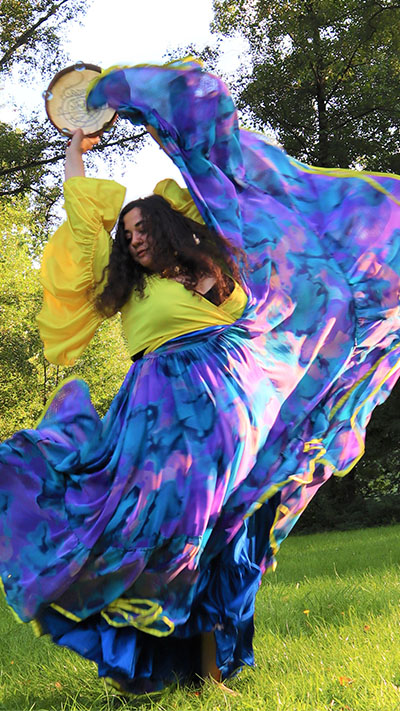 Ivana is a Serbian-Italian Romani artist, activist and professional dancer. Born on 3rd February 1991 in Novi Sad, Serbia (former Yugoslavia) she calls herself a proud Roma—words that do not come easily to everyone’s lips. Her personal adventure began in 1992 during the ethnically rooted war (1992–95) in Bosnia and Herzegovina, a former republic of Yugoslavia with a multiethnic population. As a child of a Serbian-Orthodox Roma¹ father and a Bosnian-Muslim Roma mother, her life and those of her mother and brother were in grave danger. Ivana’s father went in search of safety while the rest of the family took to hiding in a cellar, but they were far from safe. They had no money but they had luck on their side. More crucially, with the help and the support of a dedicated woman, Mrs Jovanka, they managed to escape the country and flee to Germany. There, the family was finally reunited with Ivana’s father, who had made his way to Germany. Unfortunately, the family’s journey did not end there. Mrs Jovanka informed them that their grandparents and the rest of the core family were living in a nomad camp in Turin (Italy). They decided to travel to Italy by car in 1994 smuggling their daughter and the rest of her family across the border into Italy so that all could live together again.

Although their new life in the camp in Italy was difficult and, at times, very depriving, Ivana remembers a beautiful childhood, and she is also happy and grateful in retrospect that her parents worked hard so that she and her brother could go to school there. A childhood from which she still draws her energy and strength to engage politically for the concerns and rights of the Roma and Sinti. At age 15, Ivana started work as a volunteer in various organisations that worked with children, young people, people with disabilities as well as immigrants in the neighbourhood. On 8th March 2010, International Women’s Day, she received an award for her social commitment from the President of the Italian Republic, Giorgio Napolitano. In 2011, she joined the “‘Ternype’ International Roma Youth Network,” a network of youth associations both Roma and non-Roma that empowers young people and gives them the space and the opportunity to become active citizens in the fight against widespread “antigypsyism/ anti-Romanyism or Romaphobia²” and racism in Europe. In 2015, she founded a Roma dance company called “Ternype Dance2,” with the aim of promoting dance and social art passing on the beauty of Roma art. In the same year, she also received the CHILD (Italian Coalition for Civil Liberties and Rights) award. Since 2016 she has been part of the scientific committee of the REYN (Romani Early Years Network), a community of teachers and early childhood professionals who challenge the social exclusion faced by Romani communities. In addition to that, in 2020 she staged her social denunciation show “Don’t call us Gypsies,” and in 2021 released the podcast +Rom–Rum on Spotify.

After listening to Ivana’s life story we talked about the situation of Roma and Sinti communities in Germany and I learned some interesting facts which are also the subject of the exhibition. 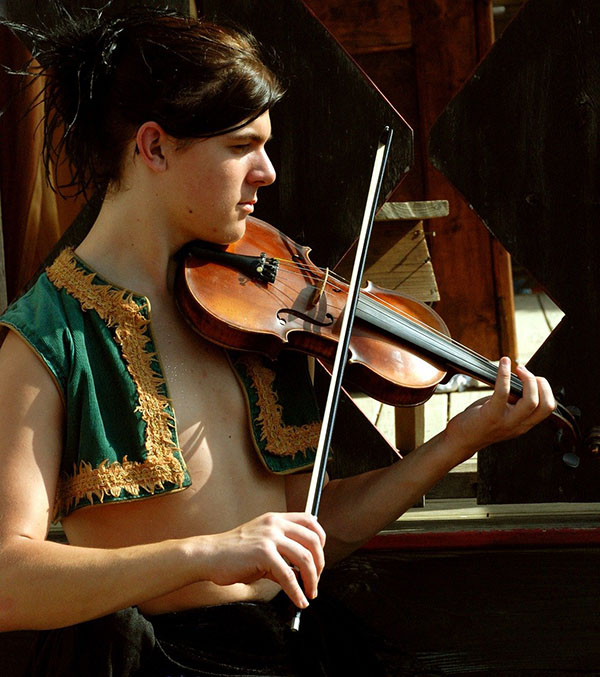 A Roma Musician, picture by Wadams/Pixabay

Culture and Traditions of the Roma and Sinti Community
Music and other performance arts, such as dance and literature, as well as crafts like embroidery, are common forms of artistic expression of the Romani and Sinti culture over the centuries and are linked to the nomadic lifestyle of the communities. For many of them, it is also the only way to earn money, as many have no formal education.

Language also plays a crucial role, especially in the cultural identity of Roma groups. “Romani” is not an officially recognised language in any European country, moreover, it is difficult to define the “language” as there is no standardised form. Over the course of the centuries, about 100 different dialects of Romani have emerged, due to its speakers having migrated across countries and settling in the various regions in which they live today. Sinte Romani is the language spoken by the Sinti in Germany. It is a particular variant of Romani with a strong German influence. In this context, it is also important to point out that almost all Romani speakers are bilingual or even trilingual because they always speak the local language of the country in which they are living.

The Roma and Sinti Flag
What unites them all is the international flag of the Romani people. Fifty years ago at the first World Romani Congress, on 8th April 1971 in London, the updated design of the Roma flag from the 1933 conference of the General Association of the Gypsies of Romania, was unveiled. The initial flag consisted only of two horizontal bars in the colours blue and green. Green symbolises the colour of grass in the fields, fertility, and eternal terrestrial values. Blue represents the sky, freedom and eternal spiritual values. The newly added chakra, which looks like a red wheel in the centre of the flag, symbolises constant movement and progress. 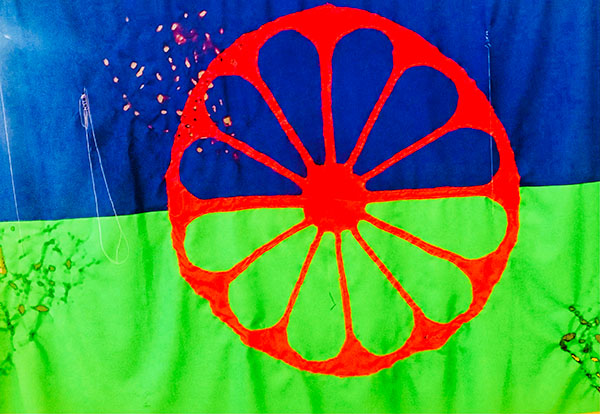 International Roma Day
Every year on 8th of April, people with a Romani background celebrate all over Europe commemorating the first World Roma Congress in London in April 1971. Furthermore, this day addresses the urgent need to better protect the human rights of Roma and Sinti and to reduce discrimination in society. During the Nazi regime, Sinti and Roma were persecuted and murdered. The National Socialists persecuted them as “Gypsies³” on racist grounds and prohibited them—like the Jewish population—from marrying “Aryans” based on the so-called Nuremberg Laws from 1945. Sinti and Roma themselves call the genocide Porajmos (“the devouring” in Romani language). Throughout Europe, the Porajmos claimed between 100,000 and 500,000 victims; the exact number is not known.

The “Z”-Word (4)
The word is not a self-designation of the Roma and Sinti, but a pejorative foreign term used to exclude Sinti and Roma. Similar to the “N-word” or the derogatory term “Eskimo”, the word “Gypsy” (in German: Zigeuner) is predominantly seen as offensive and has been widely replaced by the term “Roma and Sinti.”

This led, among other things, to the fact that in the course of the discussion about racist names and terms, on 16th August 2020 the brand and company Knorr decided to rename their “Zigeunersauce” (gypsy sauce) to “Paprikasauce Ungarische Art” (paprika sauce Hungarian style), as they had come to the conclusion that the term could be interpreted negatively.

You can find out more about Ivana Nikolić and the story of the Romani people and culture by clicking the links below!

More about the history and present of the Sinti and Roma:
Central Council of German Sinti and Roma: https://zentralrat.sintiundroma.de/en/
“RomArchive”: https://www.romarchive.eu/en/