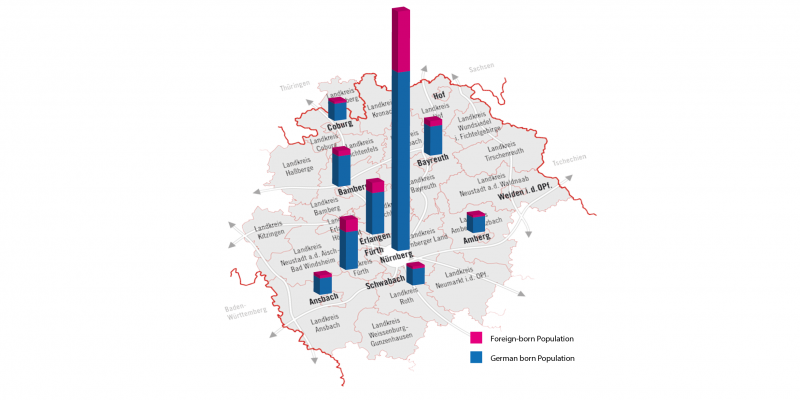 People come to the Nuremberg area for many different reasons. Perhaps they work for one of the many international companies located here, or maybe they have come to study. Some are asylum seekers or migrants fleeing war in their own country, and others are here for their own personal reasons. Whatever the motivation, the experiences tend to be similar. When moving to a different country, much is left behind. Some things that identify a person, things that are loved, are brought along, material possessions but also immaterial aspects of culture, festivals, crafts and delicious ways of cooking. These are the qualities which make life in a multicultural environment vibrant and colourful. New experiences, new tastes and alternate ways of living all contribute to promoting Nuremberg and its region as an open, lively and extraordinary place to live.

Recently reports claim that 46% of the population of Nuremberg has an international background and that this will soon rise to more than half the population. We decided to look at what actually lies behind these figures, the Bavarian Regional Office for Statistics (Bayerische Landesamt für Statistik) were glad to help. We requested information regarding the origin of foreign-born populations in nine cities of the Nuremberg Metropolitan Area. The numbers from 2018, really are surprising, but require clarification to understand the real makeup of the urban populations.

So rather than using this somewhat nebulous figure, we asked for numbers of those actually born outside Germany the so-called “foreign-born-population” (fbp) to throw some light on the demographic structure of the urban populations.

Germany, as a whole, has one of the highest foreign-born populations in the world. Numbers vary somewhat depending upon whether repatriates (from the former Soviet Union) are counted or not. According to UN figures, Germany has a fbp numbering twelve million, accounting for 14,9 % of the population2. Other sources (OECD)3 point to 16 % of which seven million are foreign residents (without german citizenship)4.

Nuremberg has a remarkable diversity with people from around 158 different countries,5 (there are 195 countries in the world) putting it on par with some of the most iconic multicultural cities around the planet such as Amsterdam, London and New York which have similar numbers of national representation. Not only is this the case in Nuremberg, but 143 of these nations are also represented in the other cities of the region. But on closer inspection, we find that some countries are represented by only a handful of people, whereas others number hundreds and a few count thousands.

The Nuremberg Metropolitan Area consists of 23 districts (Landkreise) and eleven cities. With the figures obtained, we looked at the demographics of nine of these cities (excluding Hof and Weiden i. d. OPf.). In general, we see that all the cities have a combined population of just over one million – of which a little more than half (520,000) live in the major city Nuremberg. The next largest city is Fürth with a population about one quarter that of Nuremberg at around 128,000, closely followed by Erlangen with 112,000 residents5.

Looking more closely at these populations, we see that taking all nine cities together 21 % of people are foreign-born. Typical for the region are both Fürth and Erlangen with a fifth of their respective populations coming from countries outside Germany whereas one quarter (25 %) of Nuremberg’s population is foreign-born. Next, come Bayreuth and Ansbach with 16 % and Bamberg with 15 %. The remaining cities all have around 10 % of their communities coming from outside of Germany.

Nuremberg, as mentioned above, has residents from about 158 different countries. Those with more than one thousand are included in the table below.

Clearly, Turkey, Greece and Romania are the big hitters, and altogether the people from these three countries make up one-third of the population of Nuremberg with a migrant history. The reasons for this date back to the 1960s when Greece and Turkey were Germany’s traditional source countries for additional labour supply (“Gastarbeiter”) with Romania coming online in the 1990s as it joined the European Union. These proportions more or less repeat in the other cities which we have looked at, with a few notable exceptions. The Indian community of Erlangen (1,825) is actually larger than that of Nuremberg (1,525). Possibly due to the presence of international companies in the area as well as the University of Erlangen-Nuremberg.

People from the following countries concentrate mostly in Nuremberg (over 70 %) with much smaller numbers in the other eight cities: Croatia, Bosnia Herzegovina, Moldova, the Czech Republic/Slovakia, Angola, Mozambique, Tajikistan and Uzbekistan.

For English Post, it is interesting to see how many people come from countries where English is either a first, official or unofficial language. In Nuremberg there are about 10,000 such people, that is about 2 % of the total population, which is also the case in Bamberg and Bayreuth. In Erlangen, this rises to 4 %, probably due to the relatively large proportion of Indian people living there.

Cities have always been populated by people of varying languages, cultures and ethnicities. They are a layered, pulsating mishmash of individuals and groups thrown together by purpose or chance. Their success is dependent not only upon numbers and tolerance but also shared experiences and aspirations. A multicultural city is one in which the ethnic and cultural identities of its various communities are interwoven into the civic institutions and social fabric of the city, where diverse ethnicities, cultures and lifestyles flourish, their characteristics recognised and celebrated. Everyone can contribute to this goal, at English Post are ready to play our part.